The Chicago City Council Proceedings are the primary documents that record the business of the city. The Proceedings include: petitions; ordinances; committee reports; reports on the city’s infrastructure, such as the construction, maintenance and renaming of city streets; and reports on public health and safety﻿ issues. Information on a wide variety of topics fascinating to both historians and genealogists, including schools, jails, epidemics, animal control, wharves and docks, can be found in the Proceedings.

For example this selection from the December 3, 1866 meeting discusses the burial of prisoners of war1: 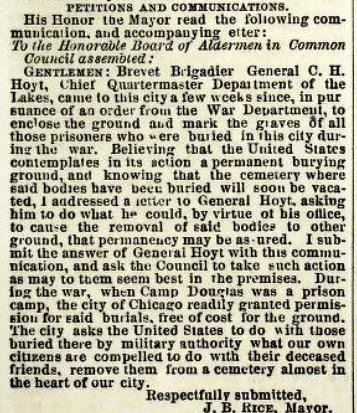 From the Proceedings we also learn such details as:

In May of 1865, John Kurtz wanted to erect a soap factory on Lumber street, Bernard Smith wanted a free liquor license, and Wm. Vocke, Clerk of the Police Court, asked that his salary be fixed at $1,500 per year.2

John Tutka, Dwight A. Stiles, Jos. Regan, and John Connolly were released from the Chicago House of Correction during the two weeks ending March 30, 1907.3

In 1931, John Glazier wanted to construct two 24 foot wide driveways across the sidewalk in front of 8030-8040 Anthony Avenue.4

The City of Chicago website contains digital versions of the Proceedings from 1981 forward.

The Illinois Regional Archives Depository located at Northeastern Illinois University holds the "Chicago City Council Proceedings Files, 1833-1871." This site provides a topical index to 35,650 files, the working papers of the Council. A file can consist of a single scrap of paper or several hundred pages.﻿ Each index entry shows the title of the file and a control number containing the filing calendar or fiscal year, file number, filing month and day.﻿ ﻿ The file contents are not digitized, but copies can be obtained from IRAD.