This congregation was founded in 1864, and was the first congregation on the west side of the river. The first Rabbi was Bernard Felsenthal.

In 1885, the congregation moved to a new temple at Ogden and Washington, from its previous location at Jackson and Sangamon. There is a photograph of this location in the Chicago Daily News photograph collection of the Chicago History Museum.

The building at Ogden and Washington was destroyed in a fire on Nov. 25, 1930, according to the Tribune of that date.

There is a brief history of this congregation in the online version of the Jewish Encyclopedia of 1906. 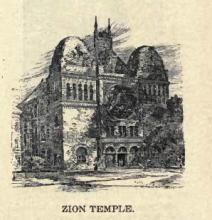