Maurice DeCourcy Prindeville was born in 1790 in Castleisland, County Kerry, Ireland. 1815, he married Catherine Morris who was born in 1796, also in Castleisland. In the spring of 1837, the family settled in Chicago. The Prindvilles lived near Chicago Ave. and Wolcott St (now State St.).

Redmond Prindville was born 1 March 1827 in Castleisland, to Maurice and Catherine. In 1847, in Chicago, Redmond married Mary Harmon, born 1828 in Paris, France.

Maurice died in October of 1847 and was buried first in North City Cemetery and then was later moved to Calvary Cemetery in Evanston, Illinois. Catherine died 14 September 1879.

Daughter-in-law Mary died 18 May 1892 and son Redmond died 12 January 1913. Both Mary and Redmond are buried in Calvary Cemetery as well.

A brief biography of Redmond can be found in:

Ahern, M. L. The great revolution; a history of the rise and progress of the People’s Party in the city of Chicago and county of Cook, with sketches of the elect in office. Chicago : Lakeside Pub. and Print. Co., 1874. Call no. J 5896 .018 Available online. 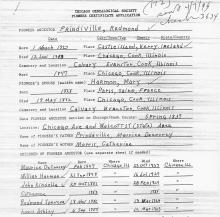 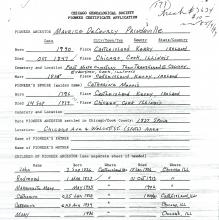 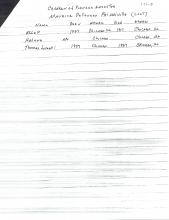