Chicago’s “Polish Downtown” was a historic neighborhood on the northwest side around Division, Ashland, and Milwaukee Avenues. From the late 19th century to the first half of the 20th century it was the center of Polish-American life in the city of Chicago; by 1890 half of all Chicago Poles were living in this neighborhood. In Polish it is known as “Stanislawowo-Trojcowo” after the Roman Catholic parishes of St. Stanislaus Kostka and Holy Trinity.

Founded in 1867, St. Stanislaus Kostka was Chicago’s first Polish parish, serving the neighborhood not only as a religious institution but also as a community center, eventually sponsoring literary societies, dramatic productions, choirs, and sports teams. Thus, Polish downtown grew and expanded outwards around this parish as wave after wave of Polish immigrants arrived in the city of Chicago.

In addition to being the home of some of Chicago’s largest and most important Roman Catholic parishes, Polish Downtown was the origin and home to almost every Polish fraternal organization in America. The headquarters of the Polish National Alliance and the Polish Women’s Alliance of America were once located in Polish Downtown while the headquarters of the Polish Roman Catholic Union of America is still located in its original building on Milwaukee Avenue and Augusta Blvd.

Besides being the cultural and political hub of Chicago’s Polish community, Polish Downtown was also once the center of the Polish-American press and consumerism. In 1910, four Polish language daily newspapers were all published in this part of Chicago. At one time, Noble Street and Milwaukee Avenue were lined with exclusively Polish-owned stores, restaurants, banks and various other businesses.

Today, the Chicago neighborhoods of Pulaski Park, River West, Bucktown, Wicker Park, East Village, and Noble Square all encompass what was once known as Polish Downtown. Although some remnants of the old heart of Chicago’s Polish immigrant population still remain, such as the imposing spires of the Polish churches, the Polish Museum of America, and the Chopin Theatre; Chicago’s Polish cultural life has dispersed and spread elsewhere in the city or into the suburbs as waves of new immigrants and gentrification have taken over this part of Chicago. Several Polish bakeries, delis, restaurants and bookstores are still to be found further north along Milwaukee Ave in Avondale while the Polish Copernicus Cultural and Civic Center is located in Jefferson Park. No matter how it appears today, there is no denying Polish Downtown’s historic roots and monumental contributions to the entire Polish-American community. 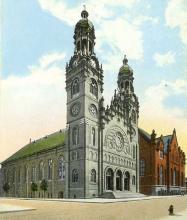