This monument of Polish revolutionary, Tadeusz Kosciuszko, was unveiled in Humboldt Park on September 11, 1904 with approximately 100,000 Chicago Poles in attendance. The monument was designed by Kazimierz Chodzinski and donated by the Polish National Alliance, the largest Polish-American fraternal organization. The monument was often a central gathering point for many Polish parades and events in Chicago, in particular the May 3rd celebrations of Polish Constitution Day. In 1978, the monument was relocated to its current, more prominent location on Solidarity Dr near Adler Planetarium.

Tadeusz Kosciuszko (1746-1817) was a Polish-Lithuanian and American revolutionary and military commander. After receiving his education in Warsaw's military academy, Kosciuszko came to America inspired by the liberal thought of the Enlightenment. He fought in the American Revolution as a colonel in the Continental Army and after the war was given the rank of brigadier general and became a naturalized citizen of the United States. During the war George Washington gave Kosciuszko command over the construction of West Point, which Kosciuszko oversaw as a skilled military engineer. After the American Revolution, Kosciuszko demonstrated his commitment to liberty and freedom when he named Thomas Jefferson the executor of his will and left his American property to be sold and used to buy the freedom of black slaves and to finance their education, encouraging Thomas Jefferson to do the same.

When he returned to Poland-Lithuania, Kosciuszko launched and commanded an uprising in 1794 in defense of the liberal Constitution of May 3rd against the hostile Russian and Prussian absolute monarchies. Significantly, during the uprising Kosciuszko abolished serfdom in Poland and granted equal civil liberties to all Poles, which marked the first time peasants were regared as part of the Polish nation. Although eventually defeated, Kosciuszko's uprising lit a beacon of hope that proved to be essential to the cause of Polish independence for the next hundred years.

For his services to the revolutions in Poland-Lithuania and America and for his commitment to liberty, freedom and equality of all people Tadeusz Kosciuszko was an obvious choice for Chicago Poles to erect a monument to as a symbol of the struggle for Polish and American independence. 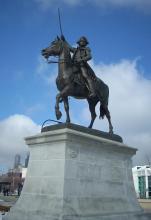