A native of New York State, Erastus became a prosperous farmer and afterwards sold his holdings and moved to Chicago. He built a grand home in 1869 in Irving Park which stands today as an interesting example of post-cival war residential architecture. The house was noticeable for the tall, windowed cupola on the roof of a two-story frame house. The cupola dominating the low-pitched roof is characteristic of that period. So, also, are the tall windows and doors with their arched frames. The interior rooms are spacious and the main ones contain ornate marble fireplaces and fancy wood trim.

The house, and the landscaped grounds around it, soon became a showplace of the community and was greatly admired, according to old settlers, by passengers going by in the trains of the North Western Road. At the time there were "some 60 houses of unexceptionally neat pattern, and almost endless variety" in Irving Park, according to an early history "Chicago and its suburbs," written by Everett Chamberlin. He goes on to say that "Irving Park ranks very high among Chicago's suburbs, both with respect to natural advantages of its site, and the extent and character of the improvements already acheived." 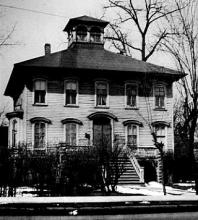